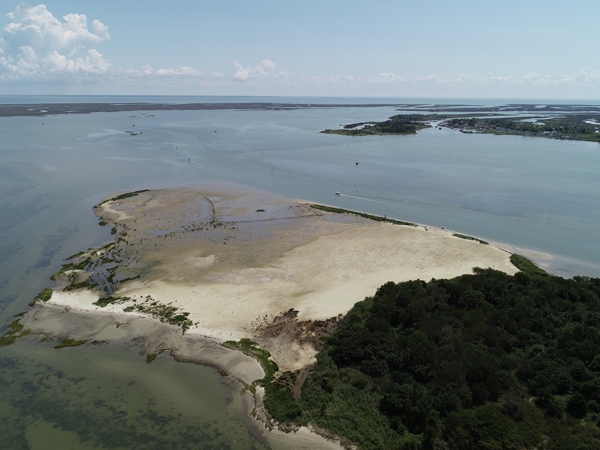 Growing up on an Island in the Puget Sound in Washington State, Paula Whitfield lived and played by the ocean, watching every episode of the Undersea World of Jacques Cousteau and diving as often as she could. Her dream was to become a marine scientist. Today, she is collaborating on Engineering With Nature (EWN) projects that focus on coastal and community resilience, driven, in part, by the devastation following Hurricane Sandy.

In 2012, Hurricane Sandy had a major impact on the Northeastern United States, resulting in nearly $19 billion of insured damages. As Paula explains, it became a catalyst for NOAA to increase its focus on the use of natural and nature-based features (NNBF) – natural infrastructure – to increase coastal resilience. NOAA’s Natural Infrastructure Working Group developed an action plan for supporting NNBF that, as Paula notes, aligns perfectly with the philosophy and goals of the US Army Corps of Engineers’ EWN initiative. This opened the door for closer collaboration between the two agencies.

In this episode, we talk with Paula about the important role of natural features – which include wetlands, mud flats, oyster and coral reefs, mangroves, sea grasses, maritime forests, as well as beaches, dunes and islands – to enhance and improve coastal resilience. She discusses how nature-based strategies are being used to help communities adapt to changing conditions such as sea level rise. For example, natural features tend to more gradually attenuate the impact of waves and currents, providing “speed bumps” that reduce erosion, compared to hardened features that can reflect wave energy to adjacent areas, causing erosion and potentially loss of habitat. Natural and nature-based features also promote coastal resilience, helping communities bounce back quickly after hurricanes as well as other coastal storms and flooding events, providing the triple-win of preserving ecological function, increasing engineering resilience and enabling socio-economic benefits.

We discuss Paula’s current collaboration with colleagues at the US Army Corps of Engineers, Baltimore District, US Army Engineer Research and Development Center, US Fish and Wildlife Service and the Maryland Department of Natural Resources that are studying the restoration of Swan Island in the Chesapeake Bay – a great example of the importance of incorporating NNBF into coastal systems. Swan Island, which provides habitat for dozens of species of migratory birds, has been shrinking at an alarming rate because of sea level rise, subsidence and erosion. Paula describes how sediments, dredged to maintain navigation channels, have been used to restore the island, and therefore, improve habitat and buffer adjacent coastal communities from waves and storms. Sharing key learnings and best practices in NNBF is a key aspect of Paula’s role at NOAA. We also talk about her current collaboration on a USACE-led initiative to develop International Guidelines on the use of Natural and Nature-based Features to support practitioners, researchers, engineers and others. The Guidelines will be available at the start of 2021.