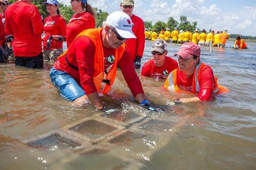 i Mike at work on oyster reef restoration in Mobile Bay, Alabama with colleagues from The Nature Conservancy © TNC.

An ecologist by training, Dr. Michael W. Beck had been working on more traditional ecological solutions related to marine protected areas until Hurricane Katrina, when he saw that there was a real need for understanding how natural habitats provide coastal resilience. Now his work focuses on figuring out how investing in nature and nature-based solutions can reduce coastal risk and save lives and money. Mike is a Research Professor and Head of the Coastal Resilience Lab at the University of California Santa Cruz. He’s also the former lead Marine Scientist for The Nature Conservancy. According to Mike, “after Katrina, Hurricane Sandy was a second wake up call for our nation. Sandy caused a huge amount of damages. Some of it we were prepared for, most of it we were not. In the end, Sandy cost taxpayers and the federal government $50 billion in recovery funding.” That led Mike to a non-traditional collaboration between ecologists and the insurance industry including with firms such as Guy Carpenter & Company, Lloyd’s of London, and Risk Management Solutions (RMS)– to study the role of wetlands in reducing risk.

The results were astonishing. In their study, The Value of Coastal Wetlands for Flood Damage Reduction in the Northeastern USA, Mike and his colleagues found that existing wetlands reduced the damages from Hurricane Sandy by $625 million and that salt marshes could reduce storm damages by 16% or more annually. In this podcast, we talk about this work and how it can help create incentives (such as reductions in insurance premiums) for investing in nature for flood risk reduction.

Mike and his colleagues have also studied the protective role of mangroves and other natural barriers in Florida. The work of one of his colleagues, Dr. Tori Tomiczek, is featured in Season I Episode #4 of the EWN Podcast. With RMS, Mike’s team estimated that mangroves provided over a billion dollars in savings during Hurricane Irma alone, and can reduce flood risks in Florida by 25% annually. Mike and his colleagues are also studying coral reefs, which can reduce wave energy by over 97%, including waves produced during hurricanes. Their work shows that if the topmost meter of coral reefs were lost, the costs of storms would double globally.

In the podcast, we also talk about the importance of stakeholder engagement for Engineering With Nature. Mike describes the value of developing research jointly with the insurance industry, which has been critical in the uptake of the work by key stakeholders and decision makers. We also talk about future risks, which are rising rapidly from climate change and coastal development. That is why it is important to put that future risk into perspective and better understand what people can do about risks. In a recently published study, Designing effective incentives for living shorelines, Mike and his colleagues found that a relatively small incentive (such as premium adjustments) could convince many landowners to invest in a more nature-based solution, such as a wetland restoration, over artificial solutions. Mike also describes how a greater proportion of government spending on recovery should be dedicated to nature-based, resilient solutions that offer not just flood risk reduction, but also other benefits such as tourism, recreation and carbon sequestration. He wants to see nature accounted for in our national economics and is dedicated to sharing his work with government and industry policy and decision makers, along with landowners and podcast listeners, to help everyone see the benefits of doing so.