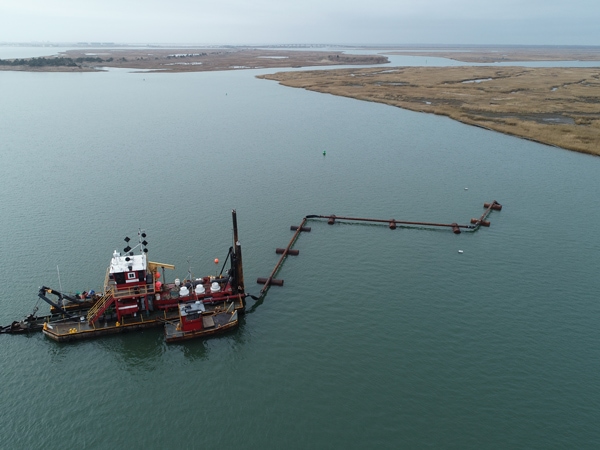 i The Dredge Fullerton, owned and operated by Barnegat Bay Dredging Company, conducts dredging in the New Jersey Intracoastal Waterway near Stone Harbor, N.J. as part of a U.S. Army Corps of Engineers project. The sediment was placed to create habitat on marshland managed by the New Jersey Division of Fish & Wildlife.

Monica Chasten grew up in Vineland, NJ, close to southern New Jersey beaches where her parents and grandparents fostered her love for the coast. With a talent in math and science, she started looking at the coast in a different way, wondering why the waves would break the way they did and how “piles of rocks” could protect the fragile shoreline. She translated her passion into a 35-year career as a coastal engineer with the U.S. Army Corps of Engineers. Monica was the moving force leading Philadelphia District to become the third USACE EWN Proving Ground in 2016.

In 2012, Superstorm Sandy devastated the coast, which, as Monica describes, “was, in my lifetime and in my professional experience, the worst storm that has hit the New Jersey coastline.” With roads closed, Monica visited the area by boat to assess the navigation channels. She observed houses in the bay, navigation channels blocked with sediment, and debris everywhere. Her mission was to restore navigation, given the life safety issues associated with shoaling in the federal channels.

For years, the Corps had been looking at how best to use sediment. People generally accepted that there were better options than basically “throwing dredged material away” in upland areas, but traditional policies and standard practices often presented obstacles to trying anything different. Post-Sandy, however, more favorable conditions for innovation emerged that provided opportunities to apply Regional Sediment Management and Engineering With Nature to produce a range of value through beneficial use.

Working with colleagues across the Corps, the state of New Jersey, private industry, and non-profit organizations, Monica initiated pilot programs that put EWN principles into practice for which she received the EWN Leadership award in 2016. One project involved dredging the New Jersey Intracoastal Waterway navigation channel and using the sediment to restore nearby Mordecai Island, a critical habitat and protective buffer that was degrading because of erosion. Because of her persistence, sediment dredged from the navigation channel was placed to stabilize the most vulnerable section of the island. This effort complemented the work of others, including the State of New Jersey and the Mordecai Land Trust, and served to protect this valuable habitat while providing an important buffer against waves and destructive storm surge for the nearby community. Other pilot projects undertaken in partnership with the State of New Jersey and others in the Cape May Wetlands Wildlife Management Area included the Avalon marsh enhancement and Ring Island habitat creation projects.

After successfully completing several projects, the Corps, the State of New Jersey and The Wetlands Institute launched the Seven Mile Island Innovation Lab (SMIIL). The initiative is designed to advance and improve dredging and marsh restoration techniques in coastal New Jersey through innovative research, collaboration, knowledge sharing and practical application. SMIIL has brought together a diverse group of organizations to test, demonstrate and innovate in delivering engineering, environmental and societal benefits.

Sediment is an important resource that can be used to protect the wetlands. In turn, the wetlands help protect coastal communities. Throughout our conversation, Monica highlights the importance and value of collaboration on science, research and development. She talks about learning from others who have conducted similar projects, sharing experiences across the coastal community, and engaging with stakeholders to innovate, develop and apply better practices for protecting fragile coastal environments and the communities they protect.